Mama, Don't Let Your Ram Lambs Grow Up to Be Pets: A Cautionary Tale

I was in the midst of a complete renovation of this old house's antiquated kitchen when I realized that it was the weekend of the Maryland Sheep and Wool Festival. My then-wife and I had seen Jacob Sheep in Cornwall and thought if we could find any in the U.S., we'd raise them. I stopped work on the ceiling, drove up to the Festival, and to my amazement, found three Jacob Lambs for sale by Marcia Read.

Marcia was one of the prominent breeders of Jacobs, contributing beautiful progeny-tested sheep to many of the earlier flocks. The lambs were two 2-horned ewes and a 4-horned ram. We were completely unprepared for them, but we bought all three, and that was the start of our flock. I think Marcia may have warned us not to get too friendly with the ram, but we were giddy with our small flock and treated the three lambs the same. They were, in a word, pampered.

Rams are different from ewes. Maybe you haven't noticed, but males and females are different in lots of species! A major part of the makeup of the ram's very being is to establish his position on the dominance ladder. The most dominant one gets the girls, so to speak, and gets to pass along his traits to the flock. So from an evolutionary standpoint, dominance is important to the survival of the flock. Dominance is established physically, through demonstrations of strength. Rams are called rams, because, well, they ram one another. They ram any other ram that they think might be nearly equal to them in strength and influence.

When you make a pet of a ram, he grows up unafraid of you. He looks to you for food, and maybe even for some form of friendly attachment. In short, he doesn't fear you; he sees you as a sort of equal. A lot of this depends upon the individual ram/human interaction, but a ram can easily grow up seeing an individual person as an equal, and he needs to establish the terms of that relationship the only way he knows how (see previous paragraph).

The ram lamb, Pepper, grew up. He was very close to me, readily letting me pet him. He loved to stand up with his fore hooves on the wire fence, head over the fence, letting me scratch around his ears. Sometimes he would even lay his head on my shoulder while we communed. Pepper kept growing up. His horns were dramatic; the two lower ones curled beautifully below his head, while the upper ones went a bit wild. The left one curled off to the side, and the right one curled back over his shoulders. They got to be almost two feet long. He was amazingly accurate using those horns to hook and poke things. It was fun to watch him delicately scratch just the right itch on his spine with that wicked right horn.

Jacob rams mature fully fairly late, at about two years old. By that time, they have reached their full size and their horns have done most of their growing. They have been contesting the other rams and their position in the hierarchy. They're just looking for challenges, or to be challenged. So, given the relationship we had developed, it was perfectly natural that Pepper started to challenge me. After all, he didn't fear me, I was on close terms with him, I was a dominant creature, and I was able to catch him and overpower him for shearing or hoof trimming.

Watch closely while your rams fight, and you'll notice some pretty well-established rules of engagement. The two guys eye each other, staring one another down. They approach head-to-head. One will attempt to push his face past the other ram's face. To do so, to thrust his face to the shoulder of the second ram, is to assert dominance. If the second ram doesn't allow this, the fight is on. They back away from each other several paces, and then crash forward, head-to-head, horns-to-horns. They will repeatedly ram together until one of them concedes defeat by turning and exposing his side, allowing the winner to push his head and neck against the shoulder and back of the loser.

The whole process of staring down, backing off, and charging forward can be quite a ritual, but it can also take only a second or two. When it involves a ram and a person, it can happen so fast that the person cannot react. It sounds like an exaggeration, but Pepper hit me before I could get my hands up to fend him off. I'm no dummy; I was scared, and I quickly realized I could no longer be safe in the field with him.

When I needed to be in the field, I made sure the gate was not latched and I could get to it quickly. I found that a hose with a pistol nozzle made a pretty good defense, because sheep hate to have water thrown in their face. That worked until the day I squeezed the trigger, only to realize too late that I hadn't turned the water on!

One day I was in the sheep field using a post hole digger, one of those manual ones that is basically two shovels joined like a big set of tongs. Pepper came after me suddenly, and I swung that digger like a baseball bat, catching him on the head. It barely slowed him down, and he hit me and knocked me down, and got on top of me. I held on to his neck and rolled over on top of him, pinning him to the ground. That was the day I realized he had to go. A couple of days later, I discovered that the power linemen had been in the field to trim a tree, and I realized I had a serious liability.

I asked the slaughterhouse for his hide. I wanted it for a rug and a memento. When I got it home, it had bits of fat and flesh still attached, so I spread it out and was using a butcher knife to scrape it clean. I'm not making this up; the knife jumped in my hand as though it had been pushed, giving me a deep, long cut across the left hand. I'm still convinced it was Pepper, getting in the last blow!

Not all rams are like this, by any means. I've had some who, without being petted, were very friendly and gentle. One in particular, Sean, was very gentle and careful anytime my little daughter was around. But you really never know how they'll turn out until it's too late. You have plenty of ewe lambs to cuddle. Focus on them, and make sure your rams are afraid of you and aren't comfortable being close to you. And never turn your back on a ram!

Would you like to share a lesson that you learned the hard way about raising sheep? Click here> https://goo.gl/forms/Ov5C4CGGnLBlHDVE2 (or copy and paste the link into your Internet browser) to submit your idea, and we will feature it in a future issue of The Spotlight! 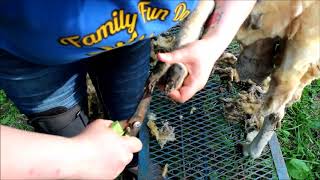 Shearing on the stand

Shearing on the stand

Mama, Don't Let Your Ram Lambs Grow Up to Be Pets: A Cautionary Tale